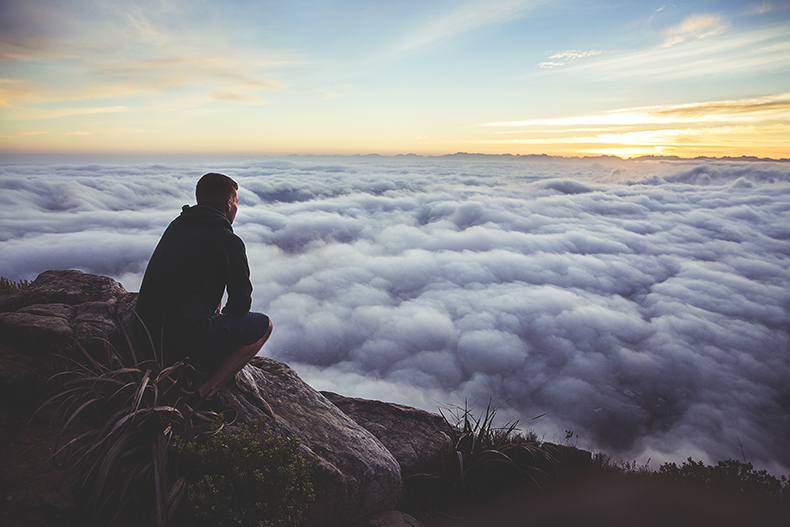 In the age of the internet all software is reviewed and compared. The UX you deliver through your app will largely determine its success.

In an earlier life, between 1998 and 2003, I was a member of the Microsoft Office team working on Excel. One of my memories from that time was the large trophy cases full of awards given out by Byte, PC World, PC Magazine, etc. Excel and Word and the rest of Office had won many awards in the many many shootouts that it had been subjected to. At the time, the state of office productivity software was a much discussed and debated topic. Every feature of every program in the office suites was tested and compared; sometimes whole magazine issues would be devoted to reviewing the office suites! Exciting!

Recently at UXprobe we ran across two interesting links, reviews of consumer banking apps on iOS and Android.

iPhone Apps for Mobile Banking in the Netherlands
– A Comparison, by iCulture 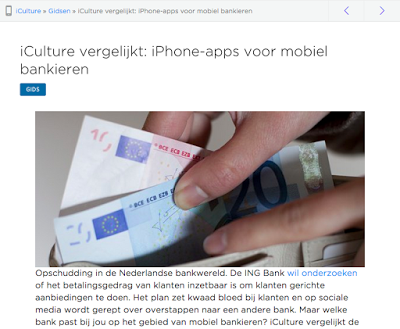 The article starts by mentioning a debate which was particularly intense lately in the Dutch news: “ING Bank had made public their intention to examine the payment behavior of customers to make customers targeted offers. The debate among customers and in social media had come to such an end that people were talking about switching to another bank. But which bank suits you in terms of mobile banking? iculture compares the ING iPhone apps, ABN Amro, Rabobank, SNS Bank, ASN, Triodos, Regio Bank and Knab.”

iCulture offers then a very detailed comparison of the functionality of all apps.

As a conclusion, they confirm that “The functionality of the various mobile banking apps on the iPhone deserves your attention when looking at which bank you want to switch to.”

Apps for mobile banking services in Belgium
– An article, by ZDNet 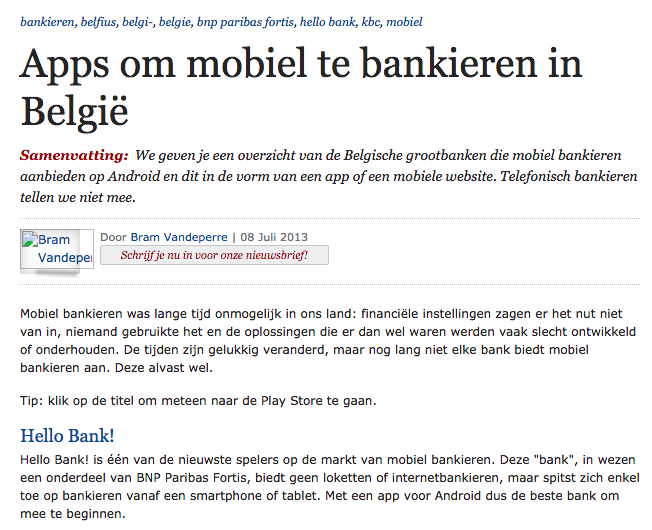 The article is an overview of Belgian banking apps for Android. It describes each app, with the basic functions, a screenshot and a short comparison with another app. The article stays quite neutral, but still gives a pretty good idea of what’s available out there. It goes through all these banks: Hello Bank, BNP Paribas Fortis, KBC, Belfius, ING, Axa and Rabobank.

Consumer banking is an industry undergoing a digital transformation, and the way that consumers use banking services is changing: sign up online, web banking, mobile apps, support via chat and the brick and mortar branch is gone. When banking becomes a purely digital service, the user experience of banking apps will be paramount. Today, most people chose their bank, and then they downloaded the app. Tomorrow the opposite will be likely – choose the best banking app based on public reviews and the bank comes along with it. Banks better have a great app or their customers will take a walk.

Banks are not the only industry being disrupted by the internet and the mobile experience. Travel, education, energy, telecom, the list is a long one. And each and every industry that used to hide behind a wall is now having to shoot out on quality of service and the user experience of the delivery of that service.

Deliver a great user experience or go home – there are going to be clear winners and losers in these disruptions.