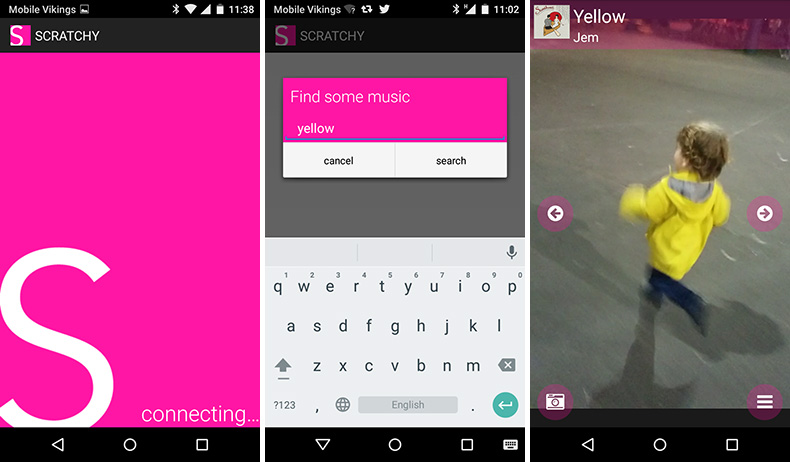 How it all started

Christmas 2013 – Jan and I were in Paris attending LeWeb. We saw a keynote where a startup was talking about its funding journey (TL;DR; – go to San Francisco). This startup got a nice investment in the valley and of course that always causes a tiny bit of jealousy when you hear it. Of course you always think: “$5 million for that?! I could do that in a weekend!” 🙂

So that Christmas, after the presents were opened and all the feast was eaten, I sat down for my ‘weekend’ project – Scratchy. Scratchy is a simple video recording app on Android, similar to Vine and others, but it has one difference – the audio is a music sample from the music store: you make not just a video but a 6 second music video. And that’s it. Scratchy is simple but it’s also quite fun. Attaching music that means something to you, to video memories with friends and family creates an emotional keepsake that is often more than a simple sum of its parts.

In the end we did not pursue Scratchy as a business but it was a very useful activity. Scratchy was the first ‘real’ app I had coded on Android and, of course, I learned a ton about making apps on Android. We had a good time making Scratchy. We really thought about it seriously, and went through the process of choosing its minimum set of features, use cases, user scenarios, etc.

Discovering the real value of my side project

That’s where it starts to become interesting: we used UXprobe to measure the UX of Scratchy. From that we learned a lot about how UXprobe works, and sometimes didn’t work. It gave us a great set of user experience data, from real use, from a real app. Now we are free to share that experience with our customers, to test with, to develop against, to use in marketing. It’s valuable to us to have an app that we are completely free to share with our customers, the data, the dev process, the source code. We have used the collateral on the website, in sales presentations and in videos. This is a great resource that would be impossible to get otherwise.

So – while Scratchy didn’t escape being an ambitious weekend project, it became much more than that. Scratchy created an extra value which I would never have expected in the first place. Because, well, I did not know yet that side projects were long considered one of the best ways to improve skills (The Science of Side Projects), launch a career (Jessica Hische and her “Daily Drop Cap”), or create a massive growth hacking (Unsplash by Crew)!

Now that I know, I pay much more attention to any side project that comes across. And I have a few going on, but that will be for another post 🙂