Story of an Empowering Side Project: UXvue 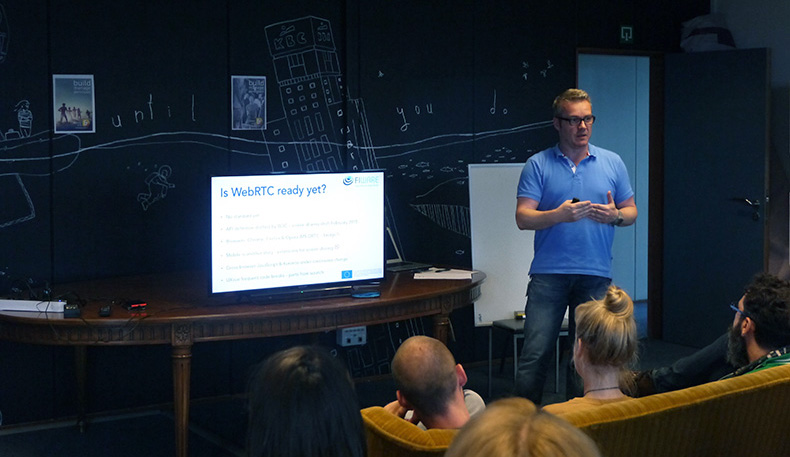 Jan Moons is a co-founder of UXprobe. After working at Alcatel-Lucent for 15 years, he founded UXprobe in 2013. Last December, UXprobe was granted 100,000€ by CreatiFI to launch our new product, UXvue. Originally, this innovative remote testing system was “only” a side project.
Want to hear how Jan turned a one-weekend project into a complete growth-generating product?

UXvue is now a significant part of UXprobe’s development as a growing startup. Through UXvue I got in contact with CreatiFI – which turned out to be the perfect organisation to support creativity and product development. UXvue also adds a very important diversification to our offering – remote testing is something our customers are really interested in.

The main thing to learn here is that you should be considerate about your side projects. They might become really handy at some point! The story of my journey will explain it all.

First, let me tell you a little bit about me.

This how it begins

Even though I am a software engineer by education, I only really found myself when taking and graduating from a User Experience certification programme a few years after completing my studies. Working as a UX designer was definitely a big change in my career. I was finally able to tackle all the issues and questions that I was frustrated with as an engineer: For whom are we designing? Is the design useful? How easy it is to use?

Joy and frustration as a certified UX designer

After a few years enjoying resolving these new questions, another frustration entered my daily practice. To understand the users in-the-real-world –to know what problems they were encountering and how satisfied they were– there wasn’t an easy solution. You could ask them for feedback or to fill in a survey, but to really test any design with users, the only proper solution was inviting them to a physical usability test lab. It was also very frustrating running into the narrow scope of these usability tests (you can only do the tests with so many users), their artificial environment, and seeing people adapting their behaviours because of it.

Playing with a futuristic idea

I started to play with an idea: Wouldn’t it be great to be able to look over the users in the real world? Would it be that difficult to build some interface that mixed data behaviour and video? At the time, it sounded more like a dream of course. We’re talking here about the years 2008-2009; you know, the iPhone had just been invented. We had no clue what was awaiting us in the coming years in terms of technology development and usability progress!

Finally, playing with the idea was not enough anymore. The technology around me was evolving fast, making my idea a bit more possible each day. At work, we were developing an immersive video conference system. I was looking into the future, but gathering real feedback from users was still a struggle, even when working with the most advanced techniques.

Trying my idea as a side project

In 2011, I decided to give my idea a go to see how far I could take it –mostly for the challenge and the fun, why not? This kind of side projects always lifts up my mood. It gets me going. It brightens my daily work. Over a couple of weekends, I developed a prototype that would allow a UX researcher to invite users to use a website, a piece of software, and to remotely watch what they are doing. The basic version was working. I was pretty satisfied. But a side project is a side project, and I kept it aside, for a while… 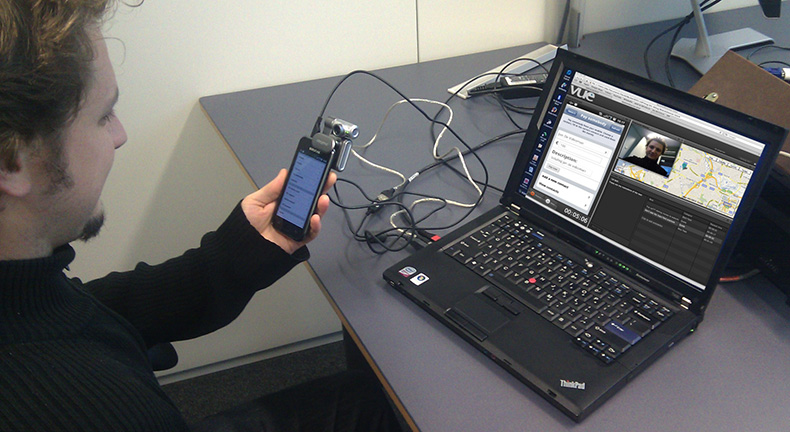 Forgetting about it, busy with some other stuff, until…

In mid-2012, I left the place where I had worked for 15 years and started a new job. I had new goals and challenges in mind. After a few months, I was pretty much settled. With the routine, the old frustration returned. At the same time, in March 2013, I co-founded UXprobe with Paul Davies. This was the beginning of a very exciting time. Being busy, very busy, did not prevent me from continuing to work on my “UX platform – VUE” from time to time. UXprobe definitely put me in a new mindset; we were getting in contact with many interesting organisations and people.

Thanks to iMinds, the first incubator we joined with UXprobe, I came across the European programme, CreatiFI. They were looking for start-ups or SMEs to present an innovative prototype and were offering a grant to develop that prototype into a product with a strong business plan. I had the perfect excuse to pull my side project out of that old folder!

“I came across the European programme, CreatiFI… I had the perfect excuse to pull my side project out of that old folder!”

The success story of my side project with CreatiFI

The CreatiFI project started with Open Call 1 in September 2014.

Supported by iMinds’ mentorship program, I started to shape my side project –still-called “VUE”– into something presentable. I had to think about what kind of product it could become, not only technically but also in terms of business development. Working on this tool meant a lot of work, but it brought a lot of satisfaction too: my original idea was about to be brought to the world. Even if still on paper, it was becoming real.

Being part of the 59 selected projects (out of 300 applications submitted) was the concretization of a lot of effort and hope! UXprobe was given 50,000 € and 8 months to transform my side project into a working prototype with real potential business.

“UXprobe was given 50,000 € and 8 months to transform my side project into a working prototype”

From January to August 2015, we worked out all the requirements: working prototype, business model, pricing model, and investor pitch.

In August, UXprobe was one of 47 other companies invited for the final pitch in Barcelona. The companies were coming from all over Europe. I was prepared. I had several opportunities to present the now-called “UXvue project” between March and July. I had my pitch at my fingertips. The prototype was working well, and our business case was strong.

After a 30-minute interview, the feedback was very good. The CreatiFI jury was happy with our progress. We definitely had validated our participation to Open Call 1, meaning we got the last portion of the grant! 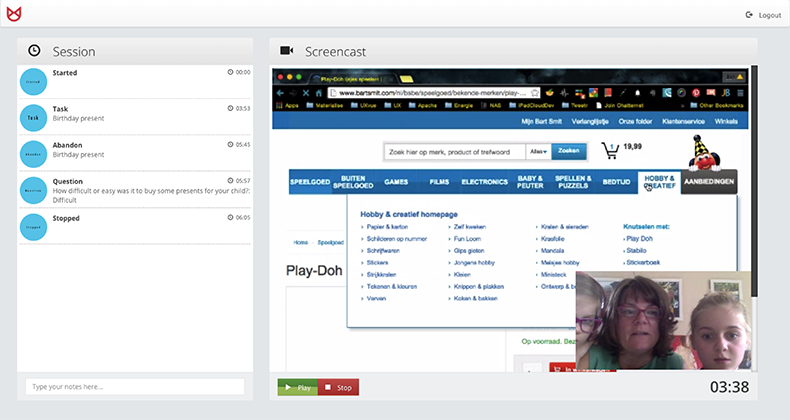 The Open Call 2 started in October 2015 when UXprobe was one of the 32 companies invited to pitch. You see that the number got narrower at each stage! 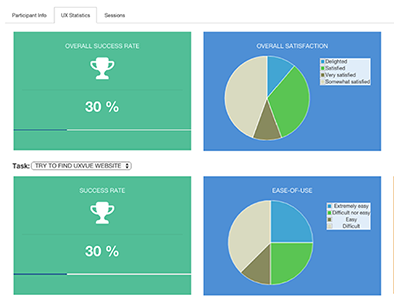 This time, the challenge was to prove that UXvue’s prototype was ready to be developed as a full product and launched into the market. I knew that UXvue had a great chance: we had brought the prototype so far that we were already using it in demo for our customers. From these interactions, we had received a lot of positive feedback and interesting inputs. But the competition was getting really serious; from knowing some of the other applicants, I could tell that they were presenting very good projects. The jury was tough and went into every detail of our planning in terms of both technical challenges and business development. At the end, I left the pitching session unsure and puzzled.

When the results were announced in December, I have to admit that I was surprised, happily surprised, but still surprised!

We were among the 9 selected projects and had just won another grant of 100,000€. That was amazing news for UXprobe.

Now we’re off to launch UXvue on the market!

The icing on the cake

Amazing news for your company does not always mean amazing news for other people, but this time we were lucky enough that our press release reached the right channels: in a few days we had articles on 6 different websites and 2 in the paper press (Metro and De Tijd – the most important financial newspaper in Belgium).

UXprobe had its little buzz effect: from social media mentions to website visits, we were hitting numbers we had never reached! And, in the real world –at the office, in our incubator, among our friends and family– people were congratulating us. It lasted a few days, but the fever was exhilarating. I could not have dreamt of a better way to end the year!

The lessons learned along the way

> Open your eyes, seize the opportunity
For me, CreatiFI was the right chance at the right moment. My side project was mature enough, and I had the knowledge and the environment. I had the desire and the need to go further and build that prototype.

> Take the reward – your efforts are not in vain
It was such a pleasure to see a side project growing, becoming real, and being a push-forward for the startup that we were building.

CreatiFI was not an easy path; it required a lot of attention and efforts. But in the end, there is no doubt that it was worth it!

To learn more about UXvue, read our blog post:
“UXprobe Receives €100,000 Fund from CreatiFI to Launch ‘UXvue’ – What is it?”